YANA Tea Houston: The Intersection of Design and Architecture On an overcast June evening, dozens of members of the Houston community — alumni, students, faculty, architects, urban planners, real estate developers, and government officials — came together to listen and join in conversation about the intersection of design and architecture.  Maria Nicanor, Executive Director of the Rice Design Alliance, led the conversation with Sarah Whiting ‘86, the outgoing Dean of Rice School of Architecture and soon-to-be first female Dean of the Harvard Graduate School of Design.  Maria helped frame the conversation by positing that “design” is the way and the what of how people get through systems from place to place. She encouraged the audience to think about their modes of transportation, the roads they took, the sidewalks and streets they walked, and the doors and hallways they traversed to get to the Rice Architecture space where we were meeting.  All of it, she noted, was part of designing with purpose, and all design has physical repercussions, as we had just experienced.

Discussing how she came to her academic and professional field, Sarah said she has always been interested in how cities and people interact through the lens of design.  She considers herself a “realist optimist” in a world where architects traffic in the future (hence the optimism); they craft their designs on work that has yet to, and may never be, built, and must do so within the reality confines of costs, space and zoning restrictions, and the ultimate paying client.

The conversation moved to the nature and priorities of architectural education, and its purpose to expose students to a broad, multi-disciplinary perspective with design always in mind.  Reflecting on the essence of the approach she honed at Rice and intends to scale at the larger Harvard Graduate School of Design, Sarah believes architecture education should be about how to communicate visually and verbally with others.  It is also an applied art, one that melds theory and practice and for which social sciences (like sociology of the environment) play a role.

Regarding design in urban settings, both Maria and Sarah noted how several cities, including Los Angeles and Berlin, now have chief design officers.  While at first glance a positive development, they expressed concern that a single government official would be in charge of determining what is tasteful and good design, even if cast in the guise of seeking a central and coherent design theme and position for every kind of communication and built object in a city.  As the conversation turned to Houston, Sarah noted the unique aspect of the country’s fourth-largest city: it is primarily a market-driven city, with zoning restrictions limited to smaller deed-restricted communities, and urban interface elements (like continuous sidewalks) left to private property owners. The result has been tremendous growth but with disposable architecture that is meant to sell quickly and perhaps not last more than 25 years.  Sarah noted that many of the older interesting buildings in downtown were created when architects and designers could take design risks, something that is no longer possible due to market and financial forces.

As the Q&A began to wind down, an energetic member of the audience — David Robinson ‘88, a former architect and now Houston City Councilman and chair of the Transportation, Technology & Infrastructure (TTI) Committee of the Houston City Council — came forward to present Sarah with a proclamation from the Mayor of Houston, Sylvester Turner, honoring Sarah with a Sarah Whiting Day. 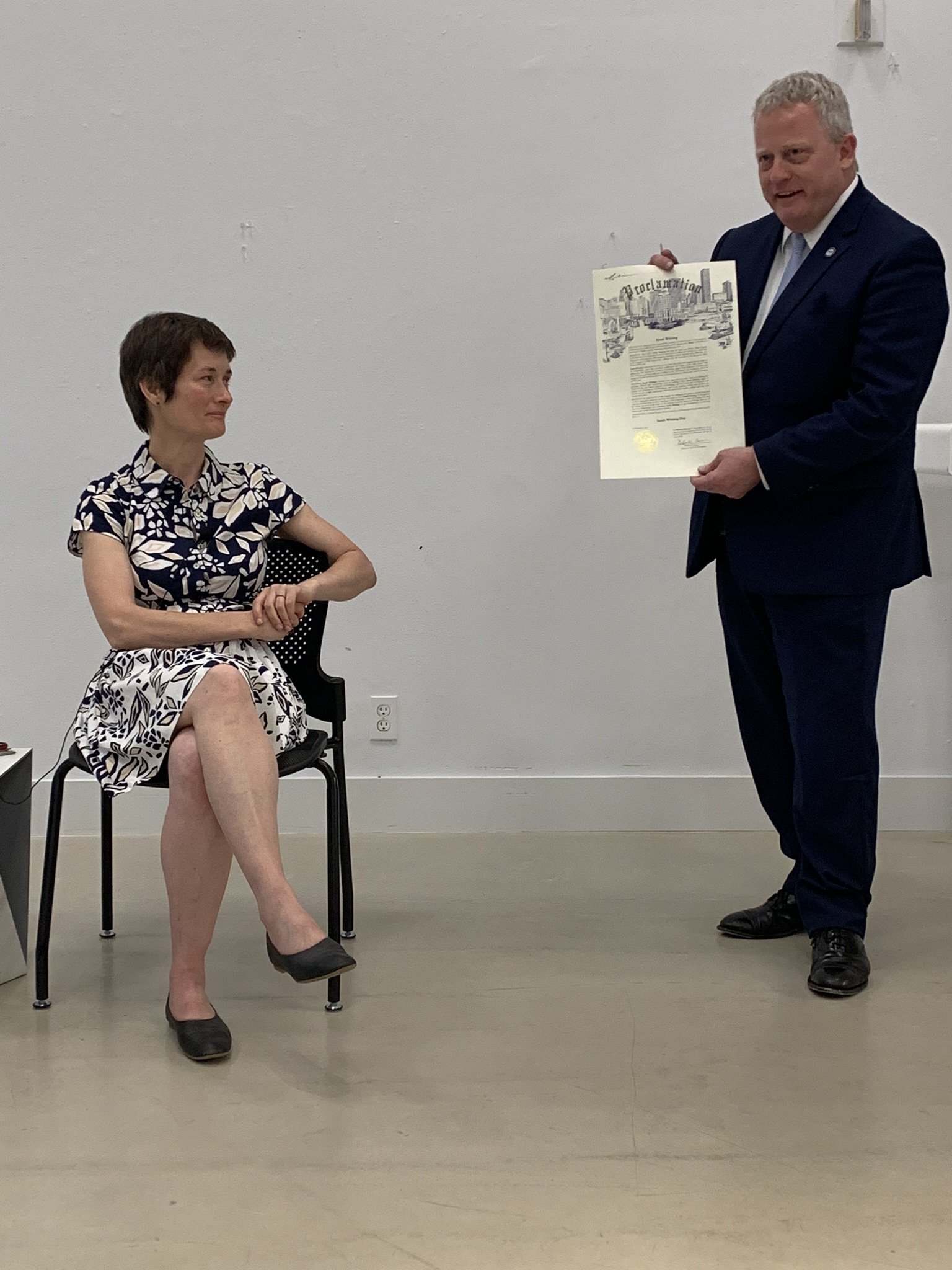 Another member of the audience and long-time supporter of Sarah, Judy Ley Allen (one of the first women graduates from Harvard Business School Class of 1963), came to the front to embrace her and share personal and professional stories about how special Sarah has been to so many people, to Rice, and to the greater Houston community.  Sarah will clearly be missed as she takes on her new Deanship role at Harvard. But, with her new YANA t-shirt, she will remain connected to us! 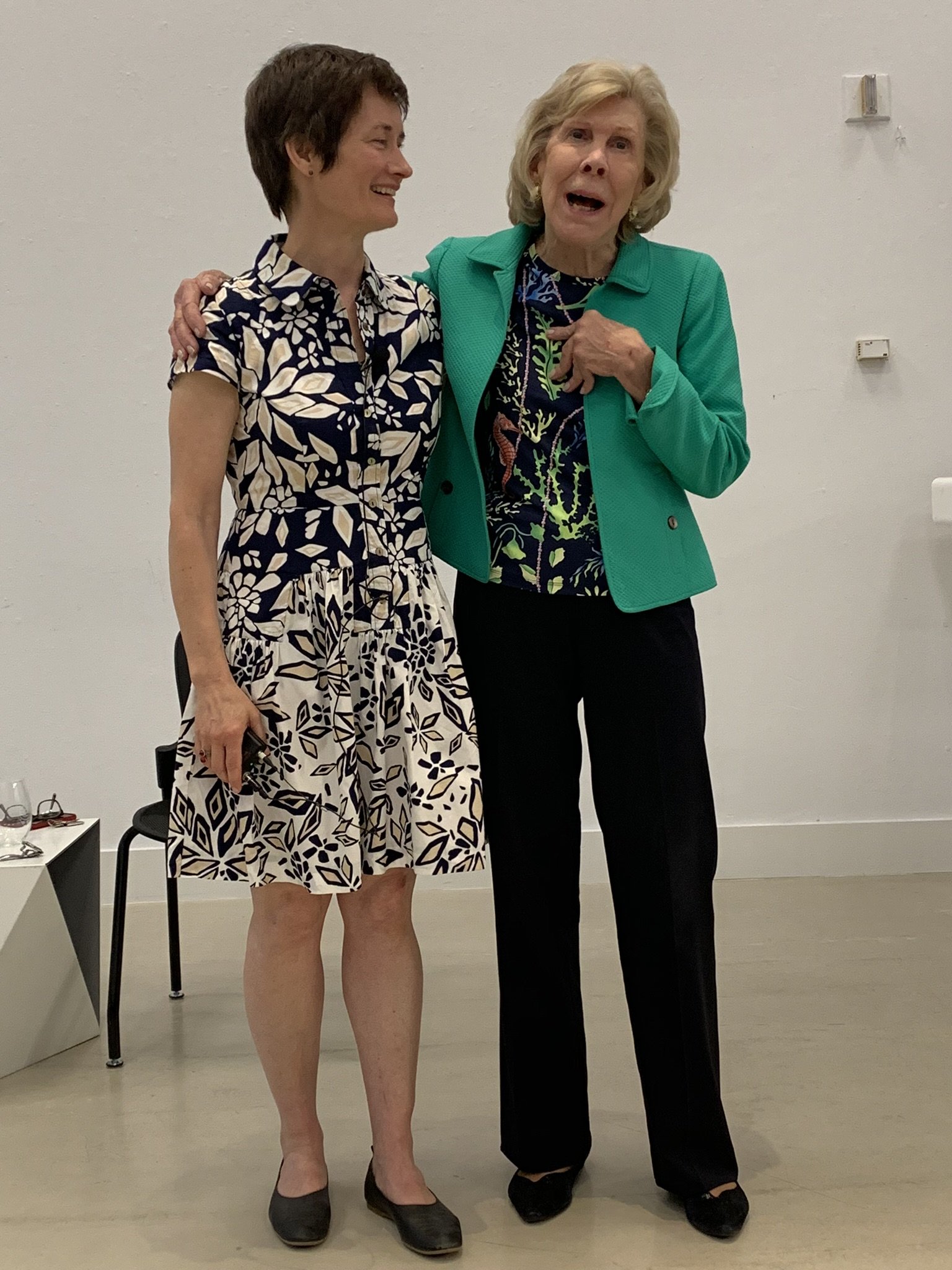 Have an idea for a YANA Tea or other event in Houston?  Contact houston@yalenonprofitalliance.org.